About
1. About IQ
IQ is the abbreviation for Intelligence quotient. IQ is the most researched attempt towards measuring human intelligence and the one with the most practical applications up to date. IQ scores have been linked to educational achievement, job performance and even personal income. In general, IQ is considered by many as a reliable indicator of successful educational, occupational, economic and social outcomes. IQ tests work by assessing a person’s ability to overcome a specific set of obstacles, either in the form of written questions or as visual puzzles. Depending on the test being taken, the questions can range from assessing quantitative reasoning ability, verbal reasoning ability, visuospatial abilities, etc. By allowing for a variety of unique intelligence variables to be measured about someone, IQ tests assist in quantifying a person’s strengths and weaknesses.
2. What measurement do we use in this site.
Matrices IQ tests measure fluid intelligence
Raven Matrices Test
Matrices tests were originally developed by John C. Raven back in 1936. The Matrices are available in three different forms for participants of different ability:
Standard Progressive Matrices:
These were the original form of the matrices, first published in 1938. The 60 problems in this test get increasingly difficult, demanding greater cognitive capacity to solve.
Designed for children aged 5 through 11 years-of-age, the elderly, and mentally and physically impaired individuals. This test contains questions from the standard matrices, as well as other test items.
The advanced form of the matrices test contains 48 problems. These items are appropriate for adults and adolescents of above-average intelligence.
“Parallel” forms of the standard and colored progressive matrices were published in 1998 – to address the problem of the Raven’s Matrices being too well-known in the general population
3. What is a high IQ score on a matrix IQ test?
Your score on a matrix IQ test will give you a ‘culture fair’ measure of your IQ level.<br/>IQ scores are distributed like a ‘bell curve’ around an average of 100. An IQ score of >115 is considered a high IQ. An IQ score of 130 is Mensa standard.
4. Cattell Culture Fair Intelligence Test (CFIT) – III
The CFIT (or ‘Cattell’) IQ test has four kinds of problems – series completion, classification, matrices, and conditions. These should all be self-evident for the easier problems below. For the ‘conditions’ type problem there are different elements such as “dot”, “circle”, “square”, and a set of relationships that need to be figured out – such as “inside”, “outside”, “not”, “and”. The object is to figure out the something like “dot inside the circle and outside the square” (making 3 the only viable answer below).

4. Cattell Culture Fair Intelligence Test (CFIT) – III
The CFIT (or ‘Cattell’) IQ test has four kinds of problems – series completion, classification, matrices, and conditions. These should all be self-evident for the easier problems below. For the ‘conditions’ type problem there are different elements such as “dot”, “circle”, “square”, and a set of relationships that need to be figured out – such as “inside”, “outside”, “not”, “and”. The object is to figure out the something like “dot inside the circle and outside the square” (making 3 the only viable answer below). 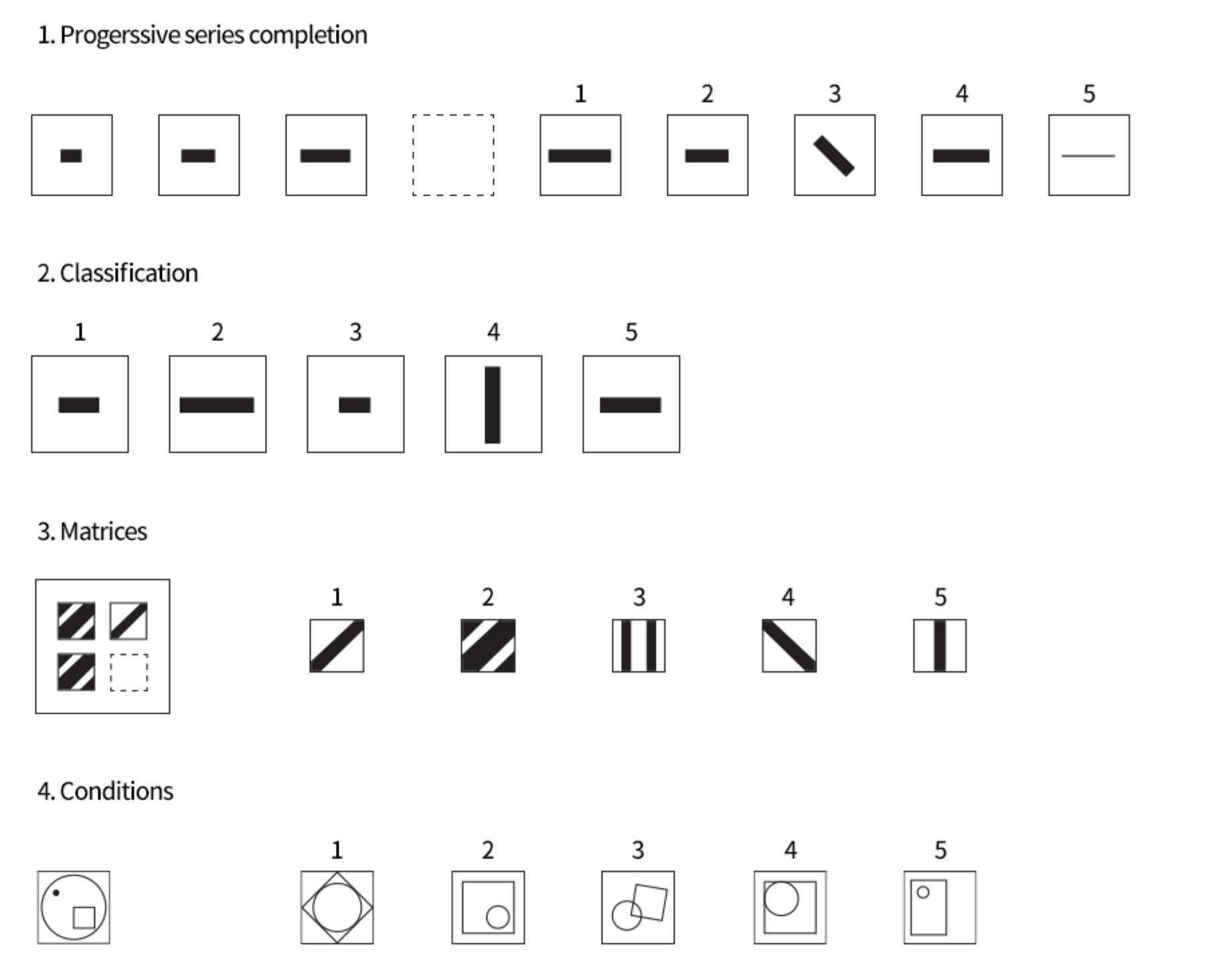 5. about_High IQ Societies
Generally, there are two ways to prove that you qualify for Mensa: either take the Mensa test or submit a qualifying test score from another test. There are a large number of intelligence tests that are “approved”, including the Cattell Culture Fair Test (IQ score 148). The Triple Nine Society, a high IQ society, accepts the Advanced Progressive Matrices for one of their admission tests. They require a score of at least 32 out of 36 on or before December 31, 1999, on the RAPM.

The International Society for Philosophical Enquiry (ISPE) and International High IQ Society also accept the RAPM as a qualification for admission. The Triple Nine Society is a high IQ society that uses the CFIT-III like one of their tests for admission. A combined raw score of 85 on forms A and B is required for admission; however, the Triple Nine Society (TNS) does not accept this score if taken after September 2008. Also, the TNS accepts the Cattell Intelligence (verbal) test, Scale IIIB, qualifying score of 173, but again, not if taken after September 2008

6. Fun IQ Facts
Here are a few fun trivia facts to help get your mind working in the proper mode.

The human brain has about 100 billion neurons and a typical brain cell has one to ten thousand connections to other brain cells.

Even though your brain is full of nerve cells it has NO pain receptors. So why do we get headaches?

Your IQ has been shown to increase with the more schooling and better toys you play with.

In the you are what you eat category, it was proven by a test done on New York school children that a diet filled with preservatives and artificial coloring lowers your overall IQ level.

If you are the first born or an only child it doesn't predetermine you to a higher IQ but families with fewer children does seem to have an impact on the IQ level. Researchers have speculated it is do to the parents being able to give their children more individualized and positive attention.

The more positive physical attention a child receives the higher their IQ levels are, so give your child more hugs.

Which is faster? A super-car traveling at top speed or your brain telling you to pick up a glass off the counter? HINT: You are going to win this race every time.